“This is such a great tool.”

Visual OFAC can help prevent violations of embargoes and sanctions.

Download our brochure to learn more about Visual OFAC. Contact us for more information, or to see the solution in action. 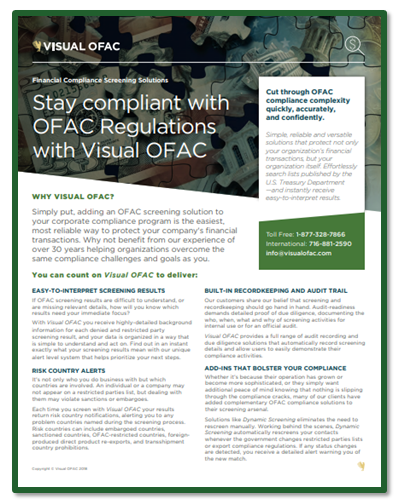 Or visit our OFAC Screening solutions section to learn more about our comprehensive suite of OFAC compliance solutions.

The Office of Foreign Assets Control (OFAC) of the U.S. Treasury administers and enforces economic and trade sanctions based on U.S. foreign policy and national security goals against targeted foreign countries and regimes, terrorists, international narcotics traffickers, persons engaged in activities related to the proliferation of weapons of mass destruction, and other threats to the national security, foreign policy or economy of the United States.

OFAC embargoes and sanctions programs are separate and distinct from, and in addition to, anti-money laundering and executive oversight requirements legislated by other statutes that affect virtually all business (e.g., the Patriot Act), all public business (e.g., Sarbanes-Oxley), or specific industries (e.g., the Bank Secrecy Act.)

The first category of sanctions targets specific individuals and entities that are named in OFAC’s Specially Designated Nationals and Blocked Persons (SDN) list. The SDN list contains thousands of names and is continually updated by U.S. Treasury. Business transactions of any sort with SDNs are expressly prohibited and U.S. persons must block any property in their possession or under their control in which an SDN has an interest.

Specially Designated Nationals and Blocked Persons (SDNs) can be located anywhere in the world, and include front companies, parastatal entities, and individuals determined to be owned or controlled by, or acting for or on behalf of, targeted countries or groups. They also can be specially identified individuals such as terrorists or narcotics traffickers.

SDNs are designated primarily under the statutory authority of the Trading with the Enemy Act (TWEA), the International Emergency Economic Powers Act (IEEPA), the Anti-Terrorism and Effective Death Penalty Act, the Foreign Narcotics Kingpin Designation Act, and the USA Patriot Act. Under these statutes and related executive orders, sanctions programs may be either unilateral (administered only by the U.S.) or multilateral (administered in coordination with other countries). Implementing regulations can be found in Chapter V, Title 31 of the U.S. Code of Federal Regulations.

Within country-specific sanctions programs there are comprehensive trade prohibitions and partial trade prohibitions. These programs “block” the transfer of assets to designated countries and use other trade restrictions to further U.S. foreign policy objectives. Comprehensive OFAC embargoes and sanctions programs block all trade with sanctioned countries, whereas selective sanctions impose trade restrictions that target specific activities.

Visual OFAC solutions help prevent violations of embargoes and sanctions by integrating the OFAC regulatory processes into your current business processes, helping you to achieve the compliance level specific to your industry, and staying current with changes and updates to OFAC regulations.